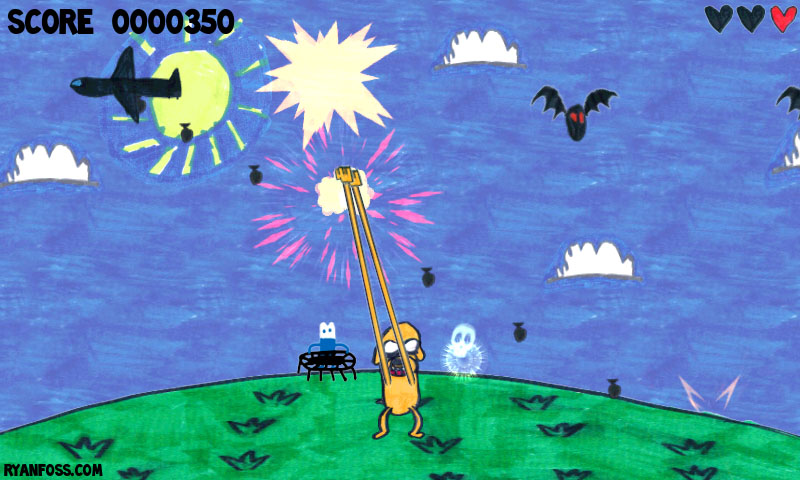 Jake in the Land of Falling People

Jake in the Land of Falling People is a simple game where you play as Jake the Dog and you have to save people who are falling, as well as keep yourself from being bombed. To do this, you use Jake super strech ability to punch and grab things in the sky.

You can play the game in a browser. There is a link on my website: http://ryanfoss.com/?p=679

When I heard about the Adventure Time game jam, I mentioned it to my kids, three boys ages 9, 7, and 5 and they were very excited. When the jam started, we spent about an hour Saturday morning talking about ideas. We came up with a basic idea: Jake can punch things out of the sky. Development took place mostly on Sunday. The boys would run up and scan in a picture of an airplane and bombs and ask me to put it in the game, so I would. And the loop went like that, with me developing other core stuff as we went along.

The game is unfinished, but functions in a complete game loop. The “boss” and “power up” items were not implemented. Sound is missing and very needed. It’s also sometimes confusing as to why you lose the game.

The Unity3D framework was used as the core engine. Code was written in C# using MonoDevelop. Art was drawn on paper, then scanned and edited in Photoshop. Playtesting was done on PC, Web, and with Android on Kindle Fire and a Nexus 7.

There are a few bugs (mostly showing up in the Android version because of timing and touch inputs), but for the most part the game should function on most resolutions.